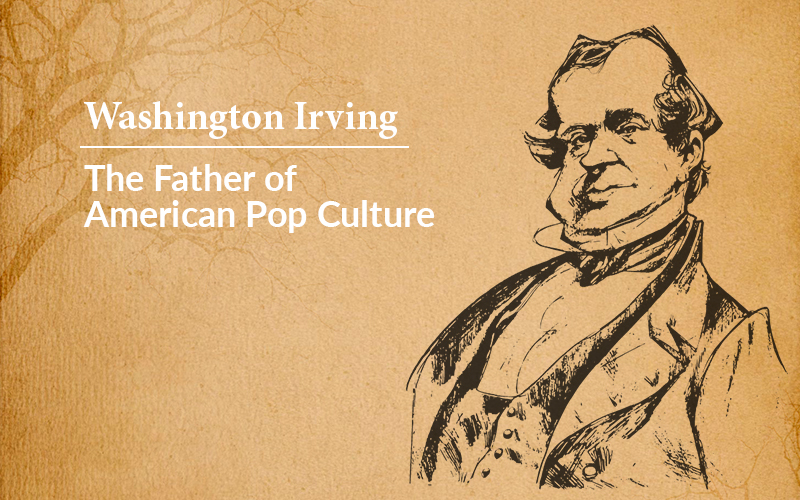 On Thanksgiving Weekend, we show our appreciation for an author who was one of the Greats of American Pop Culture!

Have you heard of Gotham? Knickers? Rip Van Winkle? Of course you have! Today, we give hommage to the author responsible for the the birth of these contemporary references amongst many others. Washington Irving is known, above all, for The Legend of Sleepy Hollow. His literary legacy is much broader, and today, the anniversary of his death, we want to go further and talk about his importance as an author within the context of the United States.

He is considered the premiere author of American Fiction, who inserted new stories based on Central European folklore into the American imagination. He was also one of the first to write in the vernacular (ie, ordinary language) without including a moral or lesson in his stories: his intention was simply to entertain.

He traveled throughout Europe, including Madrid and southern Spain, where he researched the people who starred in the discovery of America. These texts combine historical facts found in Spanish archives with imaginary elements that round out the story. His first work on Christopher Columbus is the origin of the extended Myth of the Flat Earth. In reality, the Europeans of the Middle Ages knew that the Earth was round, but even today this legend remains valid.

As if that were not enough, he is also considered one of the creators of Santa Claus. Yes, yes, Santa Claus! As we approach the Christmas holidays we will delve a little into this unknown but interesting fact. David González Romero, editor at El Paseo Editorial (in whose catalog is “Old Christmas”) comments: “He is the father of sentimental Christmas in the United States, since he introduces the figure of Saint Nicholas, the custom of mistletoe and many others elements. He is the father of that kind of nostalgia and sentimentality” (link).

If you enjoyed discovering the multiple facets of Irving as an American author, we invite you to download our AppBook to immerse yourself his most popular work in a new and surprising way.